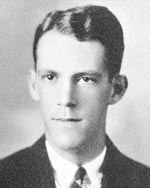 After graduating from the University of Richmond in 1922, W. Tyler Haynes entered the MCV School of Dentistry. Following his 1926 graduation, he remained at the school and began a long, successful career as a clinical professor of orthodontics. Haynes was a strong advocate for his students and known for his quiet and unassuming manner. He retired in 1968.

In addition to teaching, Haynes participated in several professional societies, including the American Dental Association and the American College of Dentists. He was also a furniture maker, cook, volunteer and gardener. An estate gift from Haynes established this professorship which "shall be used to attract and retain eminent scholars in the field of dentistry." After Haynes' death in 1991, his wife, Alice, continued to support the scholarship in his honor until her own death in 1993.